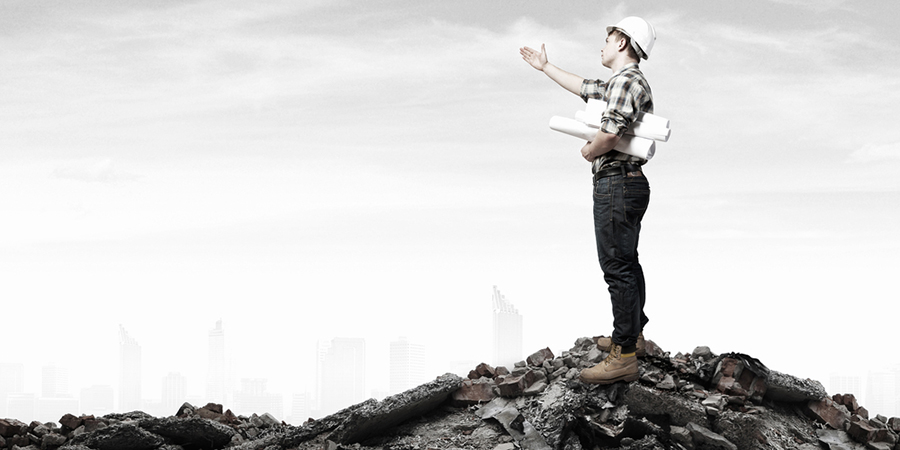 Those who’ve been in the construction industry for more than a few years know that the current demand for new construction wasn’t always the case. Memories of the financial collapse a decade ago — and the subsequent halt of new projects — still linger.

While there are major economic events that can cause construction jobs to ebb and flow, other factors such as weather and regional demand play a major role as well.

How does the current cycle of the U.S. construction industry compare to those in the past? We’ll take a look and also cover several of the major factors that create ups and downs in construction and some ways to mitigate the associated risks.

The Current Demand for New Construction

Prior to the economic woes resulting from the market collapse of 2008, the construction industry experienced the longest growth cycle in recent history. It began in 1991 and lasted almost 20 years, according to Dodge Data and Analytics, a construction research firm. Since 2011, construction has rebounded considerably and is experiencing rapid growth, as seen in red in the chart below. 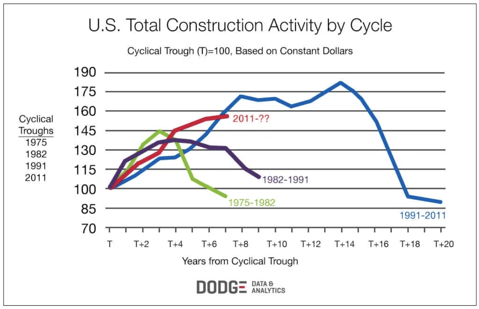 Fueling the nation’s construction growth is the current economic expansion, having lasted more than eight years (and one of the longest in U.S. history). While construction starts are expected to hold steady in the near future, some analysts and industry forecasting experts speculate that decreases may be on the horizon.

Many believe the current economic standing is simply unsustainable and that a recession is inevitable, which could once again indicate a downturn in new construction.

Even when economic downturns negatively impact the nationwide construction industry as a whole, some geographic regions and so-called recession-proof cities are more likely to withstand turbulent times and prove national averages wrong.

Likewise, even when the national economy is thriving, some areas may experience their own regional recessions that impact various industries. Many smaller or even mid-size communities can be at greater risk of an economic downturn, especially if a major employer shuts down or sends their operations offshore. Not only can hundreds of residents lose their jobs; the tax revenue from the company is lost as well, making it difficult to maintain roads, schools and other public services.

Such events typically have an economic trickle-down effect on other industries and businesses in the area, leading many of them to revise their forecasts and halt any new building projects.

The biggest cyclical threat to the modern construction industry isn’t necessarily a downturn in the economy; rather, the persistent demand for available and qualified workers. An astounding 94% of contractors report moderate to high levels of difficulty finding skilled workers. In the second quarter of 2019, nearly half (47%) of contractors reported that they are turning down work opportunities as a direct result of the labor shortage.

While economic cycles typically last about a decade or more, a single weather event can have severe implications overnight and linger for several months or even years. Floods, tornadoes and other major weather events can disrupt supply chains and distribution capabilities in a region. And, even though construction demand may be high as people and businesses rebuild, getting the materials and the people to do the work can be a major challenge and come at a higher cost.

In addition to single weather events, the construction industry often slows down in areas with harsh winters and bounces back during the summer. While this type of seasonal impact is easier to predict, it certainly emphasizes the importance of building up enough cash reserves to withstand slow seasonal periods.

How to Respond to Cyclical Demand in Construction

Knowing when the next downturn in construction demand will come is up for speculation, but no matter when or where it happens, business owners need to plan for the unknown.

New building projects will likely decline in an economic downturn, so construction companies should consider specialized services that can help them withstand the uncertainty. For example, those that specialize in repairs and renovations to older facilities may still thrive since commercial businesses may choose to improve existing structures rather than build new ones. Additionally, apartment complexes may be in higher demand as the real estate market for single-dwelling homes declines.

While the economy is strong, consider ways in which your organization can diversify its services to help minimize the impact that a downturn may have in the future. No matter the economic condition, construction companies will benefit from adopting lean and agile practices that help them proactively respond.

Some companies feel powerless to withstand forces such as changing economies or natural disasters, especially if a major weather event destroys their construction equipment, facilities, or those of major suppliers. In such cases, having a business continuity plan is critical.

Perhaps the greatest opportunity to strengthen your organization is to strengthen your workforce. While challenging in light of the current labor shortage, there are strategies you can leverage to make your company and the industry as a whole more appealing to qualified candidates. To help, access our Construction Hiring Guide below for actionable strategies and practical tips.

As a business leader, you have the power to mitigate risk and protect all that you’ve helped build over the years. At McClone, our team specializes in helping you manage these and other risks more effectively. Reach out to us today to strategize together.