Pool Safety Tips for the Summer 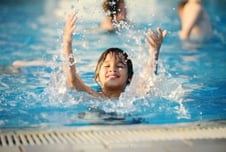 With the rise in temperature, the unofficial start to summer is here. Higher temperatures also yield higher pool activity. With more swimmers in the water, it is a better time than any to refresh some swimming statistics and guidelines to keep you and your children safe this summer.

According to the CDC website, there were an average of 3,533 fatal unintentional drownings (non-boating related) annually in the United States from 2005-2009. About 20 percent of those cases, the site says, involved children 14 and younger.

Unsurprisingly, the CDC says the best way to avoid the incidents is to increase your swimming skills. It advises taking formal swimming lessons, especially for children ages 1-4.

The American Academy of Pediatrics, the safety commission and other groups urge multiple layers of protection around pools and other bodies of water. Among their tips:

• If you own a pool, enclose it in a four-sided fence at least 4 feet high.

• Make sure any pool you use, in public or your own backyard, is equipped with safe drain covers that prevent suction injuries and deaths (these are now required by federal law in public pools).

How closely? Liz Lewis, a mother of four from Sumter, S.C., found out the hard way on Memorial Day 2005. Lewis says she was standing next to her 4-year-old son, Kai, in a friend's pool, surrounded by other people. Kai was bouncing around, just keeping his head out of the 3-foot-deep water. "I turned my back to talk to the other adults standing around the pool," she says, and "two or three minutes" later, an older child pulled Kai out of 8 feet of water. "He was swollen, he was gray, his eyes were rolled back and he was not breathing."

Fortunately, the pool owner had just taken CPR lessons and started working on Kai as someone else called 911. This is the second advisement the CDC suggests, learning CPR.

There are multiple options for learning CPR in the Fox Cities area. The Appleton Parks and Recreation offers courses. Hands to Heart, LLC has a list of available courses as well.

"By the time the ambulance came, he'd coughed up all the water and he'd started breathing," Lewis says. Kai fully recovered.

But Lewis says she tells the story so that other parents will know "your eyes and ears need to be on the children at all times."

Other CDC advisement include using the buddy system, avoiding alcohol, keep from having breath-holding contests and remembering that air and foam filled toys are not life preservers. For the complete list, click here.

Finally, vigilance matters because drowning rarely happens as it does in the movies, with screaming and flailing, Chrissy Cianflone, director of programs for Safe Kids USA,says: "Usually it's so quick and quiet that when parents recognize the silence, it's too late."

PREVIOUS ARTICLE
← Drones, Risk Management and Insurance – What You Need to Know
NEXT
Do you have questions about Medicare? We can help. →

Expired Medicines - Are they Safe?

To Purchase or Not to Purchase Rental Car Insurance