Marijuana and the Workplace Part One: What is the Law of the Land? 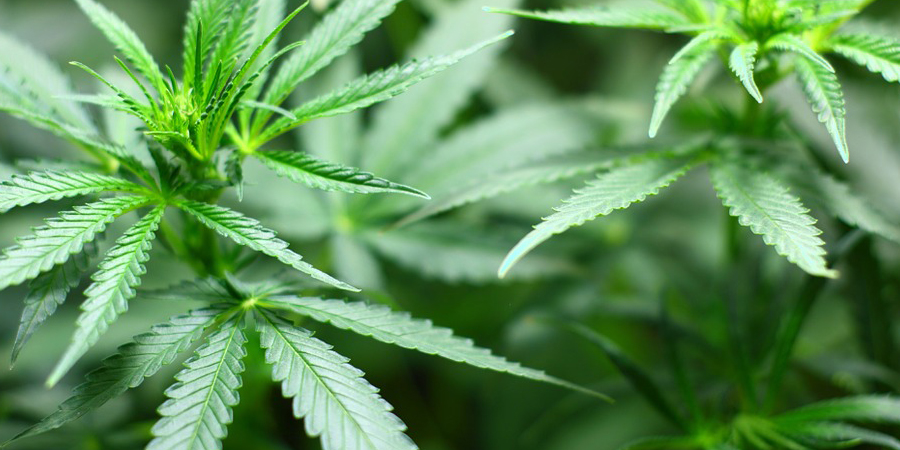 In the 1980s, private U.S. employers began implementing drug testing programs to discourage illicit drug use in the workplace and filter out applicants with substance abuse problems. The goal was to establish safer, more productive work environments. And it mostly worked—over the past 30 years drug use among workers has declined and employers have reported a reduction in on-the-job accidents, decreased turnover and lower workers’ compensation costs.

But a lot has changed since the 1980s and we’re not just talking about our hairstyles. While the benefits of a drug-free workplace haven’t changed, evolving state marijuana laws have raised many questions about employee drug testing. Can employers test for marijuana use, and if so, should they test for it? If they choose not to test, what impact does that have on the business?

Employment laws are complex and good employee relations requires an understanding of specific circumstances. There is no one answer that works for every employer. Programs in your workplace will depend on your situation and business needs.

If you have implemented a workplace drug program that includes employee testing, we encourage you to evaluate if your testing goals are not only compliant with current regulations, but also best for your business needs.

To help you assess your needs and identify risks, we have put together a two-part blog to not only discuss the complicated evolving legal landscape, but also address the insurance risks and how drug testing may impact employee recruitment and retention.

Legal Landscape is a Minefield

Illicit means “not allowed by law or custom” and generally refers to something that is both illegal and unacceptable or immoral. So, something could be illegal, but not necessarily illicit if it is considered culturally appropriate. 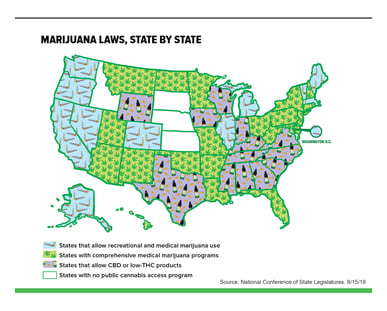 As of August 2019, all but four states have legislation that addresses acceptable marijuana use, ranging from decriminalization and prescribed medical marijuana to fully legal recreational use (see map). Many of these laws were passed by popular vote, so it could be argued that marijuana is not only legal in these states, but also culturally acceptable.

Marijuana is not legal in Wisconsin, and it is difficult to predict when or if that status will change. For the past few years, the issues of decriminalization and legalization for medical use have been hotly debated in the state legislature with lawmakers on both sides of the aisle proposing bills. The most recently proposed bill would legalize medical marijuana in limited forms to be used under limited circumstances.

Under federal law marijuana remains illegal. It is a Schedule I drug which means it is defined as a drug with no currently accepted medical use and a high potential for abuse. As far as the federal government is concerned, marijuana is on the same level as heroin or meth.

Employers who receive federal grants, are federal contractors, or employ workers in federally regulated trades (e.g., truck drivers and other safety-sensitive positions) must follow federal mandates for a drug-free workplace. For private employers, it gets a lot more complicated.

Traditionally, for employment law, courts have upheld that employers must follow the law that offers additional specific guidance. For example, the Family and Medical Leave Act (FMLA) requires covered employers to provide up to 12 weeks of unpaid leave. Some states, however, have their own FML laws that specify paid leave for up to 4 weeks. Employers in those states must follow both laws concurrently, paying employees for 4 of the 12 weeks.

But what happens when federal and state laws are in direct conflict as they are with marijuana use? It will largely depend on the timing of tests and the reasons for performing them.

Why does timing matter for marijuana testing?

The simple answer is—current marijuana testing cannot assess a user’s level of impairment. Unlike blood alcohol testing, there is no standard measurement for determining impairment levels of tetrahydrocannabinol (THC), the main psychoactive chemical in marijuana that causes euphoria and intoxication.

The urine test can only determine if someone has used marijuana. It cannot tell if the use was recent or weeks earlier. So, an employee could legally get high on the weekend, come to work entirely sober, but still test positive for marijuana use.

In states with legalized marijuana, this fact renders pre-employment and reasonable suspicion testing for marijuana virtually useless and it seriously complicates post-accident testing for workers’ compensation. As such, some state and local laws will specify when testing is prohibited. 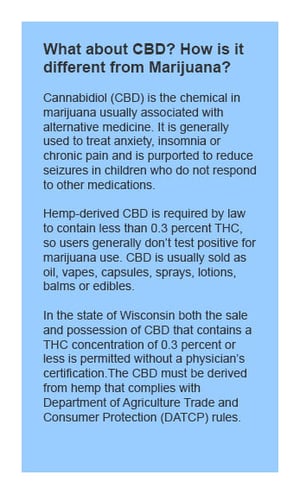 For example, in New York City, the law specifically prohibits employers from requiring prospective employees to submit to a marijuana test as a condition of employment. If you are an employer with a location in New York City, you are prohibited from including marijuana in your pre-employment screening for that location.

Other state laws may not be specific, and you will need to determine if including marijuana in pre-employment and other testing is right for your business needs. Bottom line, you will need to understand all state and local laws, including those in neighboring states, that apply to your organization.

For example, many companies located along a state border will employ workers who live in the neighboring state. If the neighboring state has decriminalized or legalized marijuana use, it may impact how your program is administered for employees who are residents of that state. Wisconsin borders Michigan and Illinois, both of which have state laws legalizing marijuana for all purposes, including recreational use.

In Part Two, we will address how to navigate the legal marijuana minefield to develop practical employee drug-testing programs. We will discuss some of the special considerations for employers in border towns and help you understand how programs can impact workplace safety and insurance coverage as well as employee recruitment and retention.

Six Ways to Improve the Perception of HR